How to Declutter Before Moving House 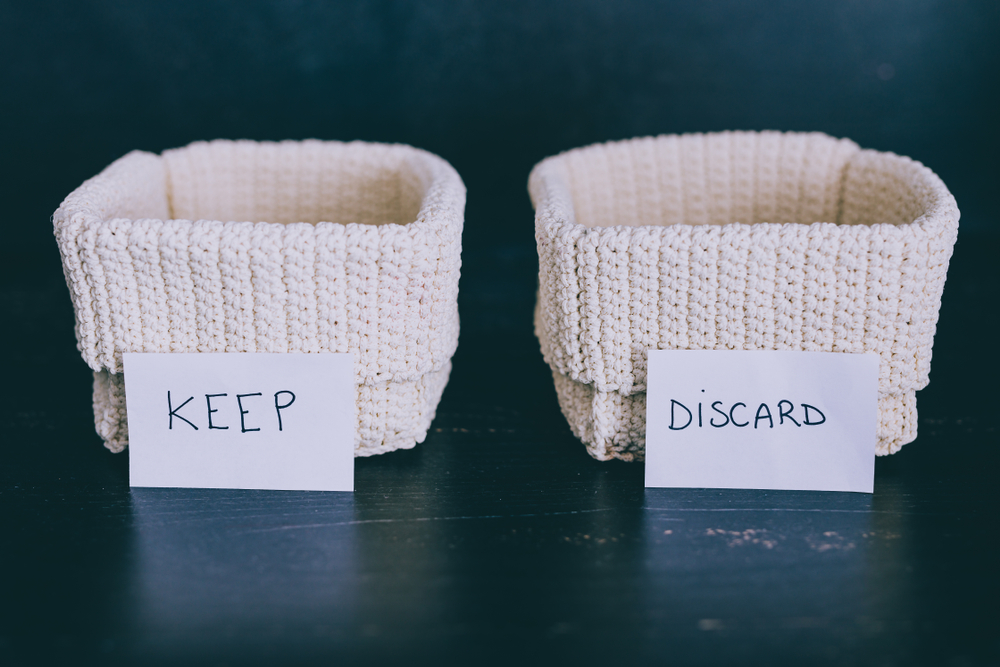 Moving house can be a costly business – and the more stuff you have to move, then the more it’s going to cost. To keep costs down – and help reduce your stress levels – it’s a good idea to declutter before you move.

Decluttering has never been more ‘in-vogue’ than it is now. Thanks to Netflix sensation Marie Kondo, more and more people are taking time to declutter (even when they’re not moving house). If you’ve resisted the KonMari trend until now, moving house is the perfect motivation to give it a try.

Why Declutter The KonMari Way?

According to Marie Kondo, if an item in your home doesn’t make you happy (or, as she puts it, ‘spark joy’), then you should throw it out. That makes sense. As human beings, we tend to acquire a whole lot of useless stuff that doesn’t bring us any kind of joy – and that just means that we have more stuff to pack and move.

The KonMari method is said to be lifechanging for some people – but even if it doesn’t change your life, it can make moving house less of a nightmare. It helps you figure out what matters most to you – and if you’re a bit of a hoarder, it can help with that, too.

If you’ve not seen Marie Kondo’s Netflix show, then you might find her approach to decluttering a little quirky. Or weird. That was my reaction at first – until I tried it, and ended up taking three carloads of stuff to the tip (and I’m not even moving!). It works. As weird as it is, it works.

So, what does the KonMari approach involve?

It’s actually quite simple. You pick up an item, hold it in your hand, and ask yourself if the item makes you happy or brings you joy. If you answer, ‘yes’, you keep it. If you answer ‘no’, or can’t decide, then Marie Kondo tells you to thank the item for what it’s done for you and then either trash it or donate it.

Okay, so the bit about thanking the item still makes me a bit uncomfortable (and you don’t actually have to do that; I’m sure it’s not going to hurt your items’ feelings if you don’t!). The first part, though, has helped thousands of people to declutter their homes effectively.

Decluttering the KonMari way is more of a process than a single act, so here are some tips to get the most out of the method.

(a) Set Aside Time

The KonMari method isn’t the quickest way to declutter, so you need to set aside time for it. You’re not likely to be able to get it done in an afternoon, so maybe dedicate a weekend (or longer) to really focus on your decluttering.

(b) Start With the Easy Things

Marie Kondo tells you to put your items into categories and start with the objects you’re not going to find difficult to get rid of. By the time you get to the harder things, you’ll be more practised with the method.

This is the recommended order to approach it:

The difficulty there, though, is what you define as a necessity. For hoarders, the ability to say something’s a necessity to avoid decluttering it can be a problem. So, here are some types of necessities to guide you:

One of the biggest reasons we hold on to so much stuff that we no longer need is because it reminds us of someone special or we associate it with a particular memory. Nostalgia creates clutter – and can make it hard to KonMari those things.

This is the time when you need to think carefully about why you’ve held onto the items – and whether now is the time to let them go. The memories aren’t really in the items themselves – it’s just a physical association with something stored in your mental memory banks, remember.

As well as nostalgia, we keep stuff out of guilt. Perhaps someone gave you a gift that you’ve never used – but you’ve kept it because you’d feel bad for throwing out a present. You have to be honest with the KonMari method. Does it bring you joy? If not, then it can go.

KonMari Your Way To An Easier Move

Getting rid of all that stuff can be liberating at the best of times – but when you see how much less you have to pack for your move, it’s even better. Less packing means less unpacking at the other end. It also reduces the cost of moving, too, so there are advantages all round.

No votes so far! Be the first to rate this post.

Get a Quick Quote

Get a Quick Quote

If you'd like us to call you back regarding our services please enter your name and number: